Tactics Tuesdays: Do You Command, Suggest, or Request Her Compliance? | Girls Chase
Skip to main content

Tactics Tuesdays: Do You Command, Suggest, or Request Her Compliance? 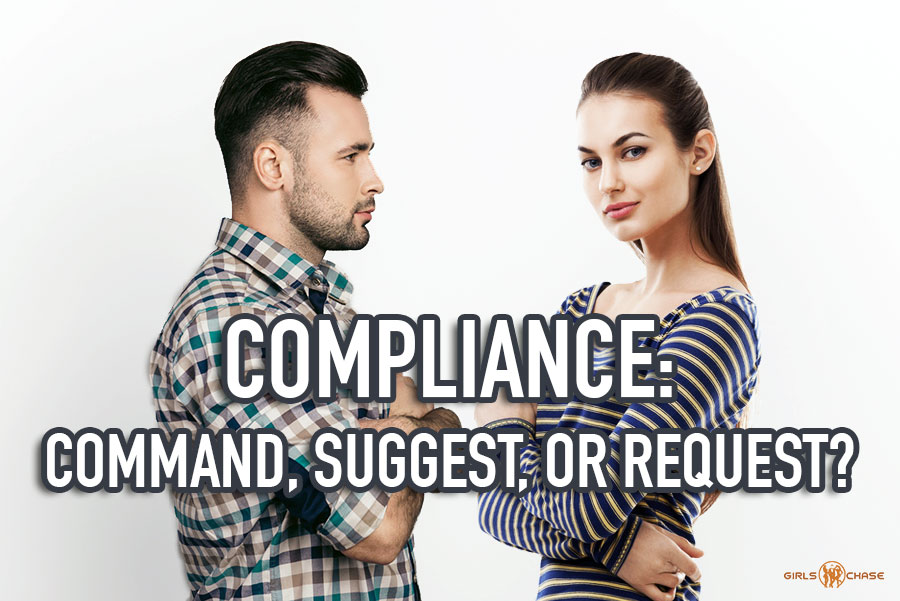 You want a girl to do something. So what do you do – suggest she do it, request her to do it, or command her to do it? Each can have very different outcomes.

It feels manly to order people around and command their compliance. Women respect and admire a man who can order others around. Even if doing so is not always the most tactful of moves, it’s the more dominant move, since it is the most effortless. You are not visibly considering the feelings of others or trying to avoid conflict; you are asserting your power plainly and without fear.

Given the popularity of egalitarianism in our modern societies, the rough, commanding element of traditional masculinity has been demonized.

However, this is a trick. You’ve been sold the idea that people don’t like order and being ordered.

This is both true and false.

5. The 10 Axioms of Compliance

It is true that people would rather be in charge – if they could be. Everyone wants to be at the top – if it was easy.

But it’s not, so most people choose a different tactic: trick people into not even fighting each other. Dominate through convincing others that domination is shameful, brutal, and archaic.

Machiavellian tactics at their finest.

Surely, you won’t be as proportionally liked as you would if you were more commanding and dominant, but you would be more respected and get what you want more often. Also, you would, if you became legendary, be liked more by sheer quantity than if you were to stay in your lane. This is the trade-off. You’re more likely to be liked if you’re soft, but this is only because you don’t pose a threat.

This is what was behind my series on self-respect and the ego/self. Those who shame or criticize the self and ego are nothing more than misguided softies at best, and wolves convincing you to don sheep-wool at worst.

However, the vast majority of humanity being soft, compliant, and submissive indicates that people do like order, or at least prefer it over other real-world alternatives.

Allow me to put it bluntly – if someone keeps doing something, he prefers it. I don’t care how harmful, unhealthy, or disturbing the behavior, if someone keeps doing it, he likes it more than whatever else is available. If someone is lazy, fat, and unambitious, he prefers to be that way, because the prospect of being driven, in-shape, and prideful sounds harsher than the occasional shortness of breath, erectile dysfunction, lack of financial independence, and TGIF mentality.

Social concerns are very powerful drivers of preference. The scariest consequence for most people is that others won’t like them.