How to Be Certain, Part 1: The Triumvirate of Certainty | Girls Chase
Skip to main content

How to Be Certain, Part 1: The Triumvirate of Certainty 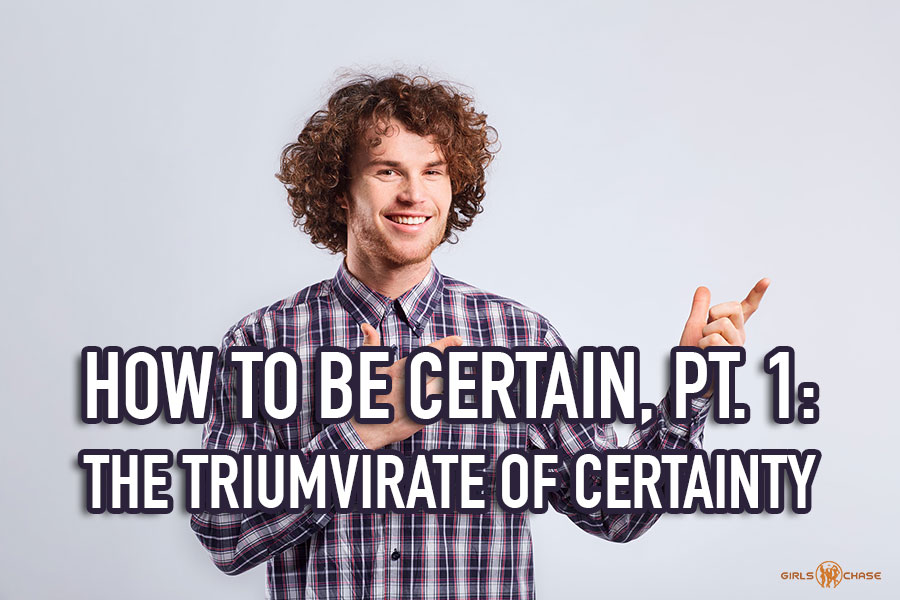 To be able to lead – whether men, women, or both – you must be certain. And to be certain, you must have three (3) elements in place.

1. He Walks Out Into the Hallway

3. Faith in Our Dear Leaders

4. The Triumvirate of Certainty

Two candidates are about to give their speeches for president of the Interfraternity Council. The IFC is the board that governs all the fraternities on campus. It controls how and when rush proceeds (the process by which fraternities and sororities recruit members) and deals with disciplinary action.

It's not that important of a position, since at this school, they're quite liberal with control, but it's still a position. And men, well, they like titles. It makes them feel important. They respect them. Women? They yearn for men with position. It gets them wet.

So these two men want it.

The first candidate is the former vice president and has been given the opportunity to speak first.

“Hey guys! As you know, I was vice president for the past year and hopefully have lived up to the duties given to that position. As you saw, I tried to reestablish the philanthropic duties of vice president and actually held a fundraiser, something no vice president in recent memory has done. Also, I oversaw a judicial board hearing and carried it out quickly and efficiently, another duty of vice president that hasn’t been fulfilled in recent years. I’ve seen how the executive board works. I’ve worked with the president closely, helped him facilitate almost every duty of the council, seen how all the paperwork gets dealt with, and have even met with administrators in an effort to better understand what the school wants from us.

I hope that you’ve noticed my hard work and dedication and will do me the honor of voting me in as president of the council. Thank you very much!”