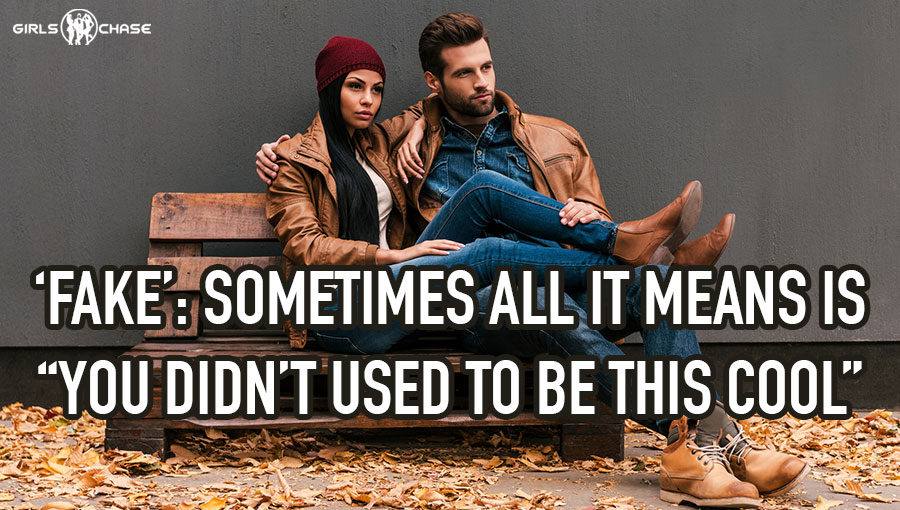 When you start to change your appearance or behavior, people can call you fake. Or you might even feel fake. Yet with Practice Mentality, you can avoid all this.

In my August article on seven major dating mistakes, a reader asks about people who view (or attack) self-improvement efforts or general behavior as ‘being fake’ or ‘not being real’:

“This is regarding barriers to improving fundamentals and improving your life in general:

Did you notice how people label any potential improvement as fake? If they improve, they think, people won’t like them for who they are and that’s bad. For people who have had advantages for a long time it seems like a natural part of them.

– Someone who is fat thinks that if he loses weight and women start liking him more, then they don’t like him for who he really is. They are just a bunch of superficial cunts. But, if you’ve been thin for a long time, it seems like a part of you.

– If you dress poorly, improving your fashion will seem as fake. Who cares how you dress? People should like you for who you are. But, those who dress well will tell you it’s just a part of them – part of who they are.

– Being famous or wealthy and getting great results with women also seems fake to many people (99.999% of people don’t have access to fame or great wealth). So, you’ll hear terms like ‘fame-digger’ or ‘gold-digger’ used to describe those superficial women who like rock stars, football players or bankers/CEOs.

– The same goes for learning ‘game’. If you’re learning it, then you’re just a fake manipulator.

What do you think about this phenomenon? Is it even real or am I delusional?”

Well, first off, this is absolutely a genuine phenomenon, and it’s something every man who sits down to improve himself in one dimension or another encounters.

4. How to Use Practice Mentality

5. Do You Ever Stop Practicing?

You start to change something about yourself, and somebody calls you fake. Or you see others change their reactions toward you as you change superficial details about yourself, and you decide they are fake. Or maybe you even look at your outward displays, deem them nothing like whom you are on the inside, and label yourself a fake.

I’m going to talk briefly about why people view people engaged in self-improvement as fake, and then I’m going to give you a useful mindset I’ve long used to not have to worry about this.

I call it the ‘Practice Mentality’. But we’ll get to that.