Hotter Women are Subtler (and Hook Up Less) 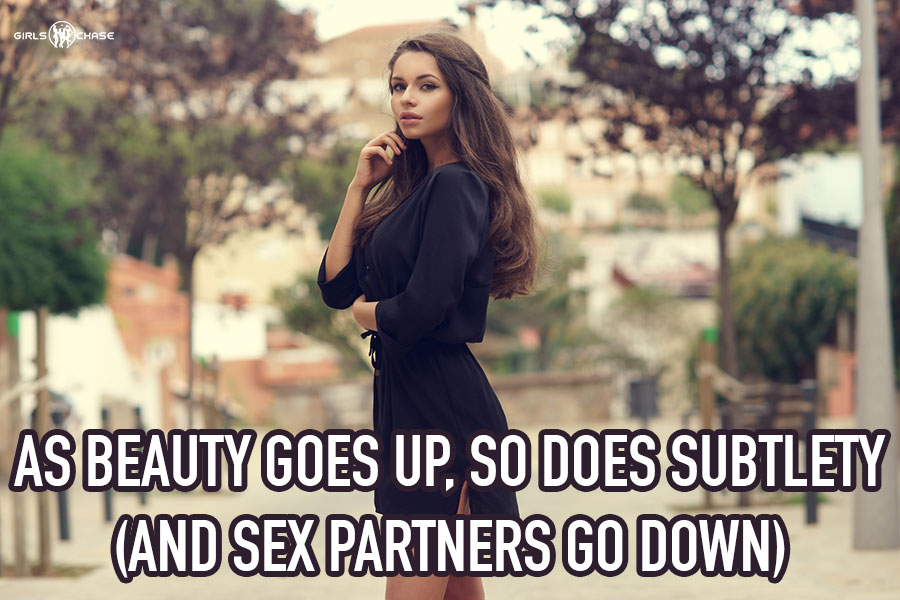 As a woman’s beauty increases, so too does her subtlety… while her number of sex partners falls. Do you recognize the signs beautiful women give you?

Recently I found myself in an unfamiliar part of a familiar town. Kind of on the outskirts. And something stuck out at me: the women here were, on average, less attractive than the women in the city center I usually frequent. More unattractive women, and more women who were only somewhat cute; fewer knockout stunners. But the approach invitations I received were much more blatant.

Whereas in the city center, I might sense a girl glance at me, then turn toward her and she’d already have looked away, brushing back her hair as she did... now, in the outskirts, I’d sense a girl look at me, turn toward her, and she’d keep her eyes trained right on mine. Whereas in the usual part of town, a beautiful girl might come hover somewhat near me, now cute (but not beautiful) girls would walk up and position themselves blatantly next to me. The difference was plain as a tree on a hilltop.

2. Why Aren’t They More Obvious?

3. She Thinks She’s Being Obvious

This is something I’ve noticed, come to think of it, on the outskirts of other familiar towns as well. The girls on the outskirts are often not quite as cute, but they are more obvious. I never expressly equated outskirts with less cute, more obvious girls before, but when I look back, it’s often been the case that a good chunk of the ‘easy venues’ I have on tap are located on the outskirts of town. These are venues where the girls you meet will be cute or pretty but not stunning, but they make up for it by being more obvious in their interest and less coy to your approach.

There are other factors likely at play on the outskirts; girls in the city center are in more of a hurry, are busier, and pay less attention to those around them, for one. They also tend to be more status conscious, which means any too-obvious signals carry more risk for them. They are also more ambitious, which means more careful screening of interested men. Girls in the outskirts are less hurried and have more time to check out and throw signals at men, and less status-risk to worry them. They’re also less interested in screening you, and more interested in whether you can provide a fun time or not.

Yet even accounting for factors like this, all other things being even, there remains a clear attractiveness-obviousness correlation; the less attractive the girl, the more obvious she makes her signals.

The less cute a girl is (or, at least, the less hot she is), the more blatant are her signals. Also, not only are more attractive women less aggressive; they’re subtler, too. The cuter a girl gets, the more coy she gets.

Which makes sense, of course... When you’re more in-demand, you can hold out for a better deal. You can play more coy. When you’re not as in-demand, you must chase down the deals yourself, and no longer have the luxury to hang back and wait for the ones you want to come to you.

But does this mean beautiful women are out of most men’s grasps?