Female Standards Are an Opening Bid 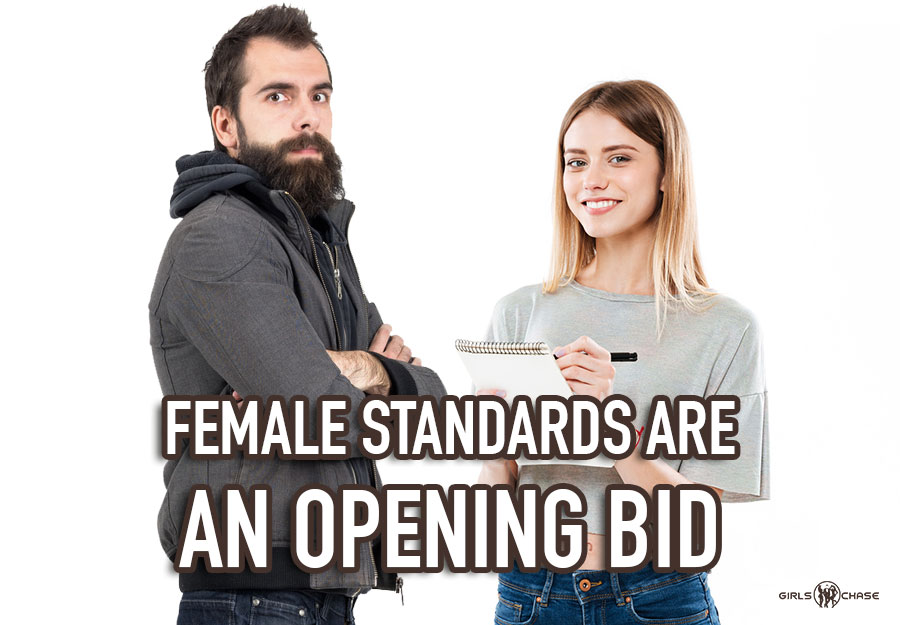 Women have a lot of very high standards. They just don’t always stick to those standards, is all. In fact, they usually abandon a lot of them.

I had a funny insight recently. Well, more a new way to look at something I already was aware of, but the new way of looking at it instantly made me go, “Ah, that’s how it is, yes.”

4. Should You Listen to Her Standards?

Anyway, in the ‘keeping a girlfriend’ one, I embedded a YouTube video of a hit 1970s soul song where the female singer talks about trying to hang onto a broke male partner she feeds and clothes and houses and whom she discovers is having an affair. It’s a great song (the single sold a million copies in its first eight weeks), and people love it... but the YouTube comment section is filled with women proclaiming how they would never tolerate a man straying on them and how the singer needs to find herself a new man.

And I thought “It is so funny how women do that.” Because I have had numerous girlfriends – beautiful, intelligent, charismatic girlfriends, with no shortage of male suitors and no lack of self awareness – declare to me they would never tolerate a man seeing other women while with them, even as they knew I saw other women while with them. I have watched these same women tell other women no woman should tolerate this and that any woman with such a man ought to leave him. Then come right back to me after these little rants to others, happy as pups.

It’s not just about fidelity. Women do it with many things. There was a poll I came across where someone asked Japanese women what they’d like to change about their man. 40% of women said a bit more muscle, 25% of women said more wealth, and another 25% said they wanted more personality. One male commenter on the poll results remarked “So just get muscular, be rich, and have a great personality. Easy!” (that’s sarcasm, in case you didn’t catch it). Another commenter remarked that the problem women face is all the ripped, rich guys with great personalities are gay.

And it’s true (the standards disconnect, not the gay thing. Although that is kind of true too)! If you ask most men what they want in a girlfriend, you’ll get a couple of items. Cute, nice, submissive, can cook and clean. That’s about what most guys want. Maybe one or two other things, like likes to dress sexy or is into this or that leisure activity. Many women have full-on wish lists of 30 to 70 qualities they want a man to have. Yet, again – reality doesn’t match women’s words. Look at the guys these girls with huge long lists of things they want date, and you discover their actual real world partners don’t have most of what these women say they want.

So why do women say they want all these things, and then turn around and date men who don’t have any of them? And then they keep saying they want those things anyway, in spite of their dating histories to the contrary?