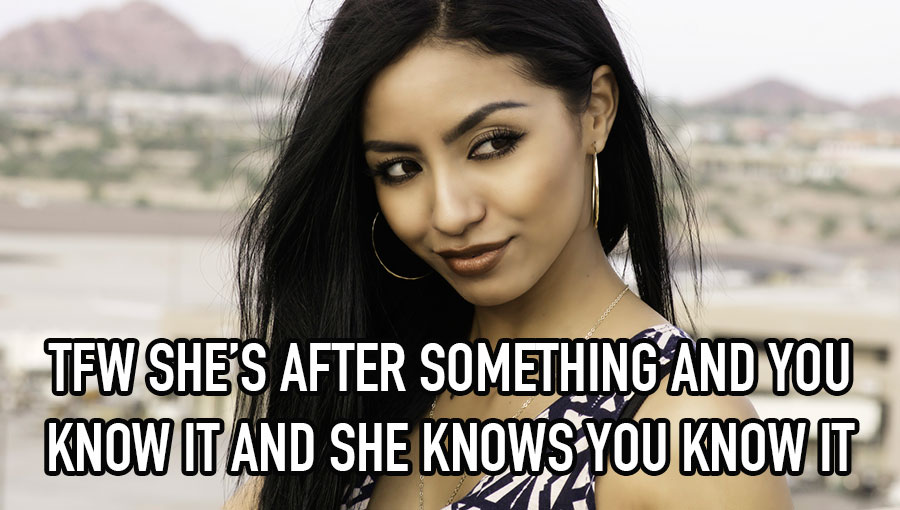 Girls: pretty darn good at getting what they want from men.

Apologies if this is a little rough-written. I haven’t slept in 36 hours (save a pair of 30-minute cat naps) and just spent 24 of those hours in a hospital emergency ward (not for myself; the injured party’s going to be fine we think). There’s a story there, though not sure if I want to share it. Suffice it to say 24 hours in an emergency ward surrounded by people in dire conditions with loved ones wailing over terrible tragedies is not something you want to experience if you have the chance to avoid it.

If you’re waiting to hear back from me via email, please be patient; I’m back over at the hospital again tonight, and if I’m not too tired after 60 hours of no-sleep I will get back to you within the next day. Anyway, we’ve got a website to run here, and the show must go on, so... on with the article.

I’ve had a few articles on female psychology I’ve been meaning to get up. This is one of them.

One of the strangest things you will notice when men talk about women is that men fall into roughly four different camps on how they think of the opposite sex:

The first guy is living in La-La Land, of course. He’s the white knight who dreams of trading his valor and loyalty in for an often ill-defined sexual payday. And the second guy just doesn’t know, and doesn’t care to spend the brain cells trying to know.

But what can we say about the third and fourth guys? Guy #3 looks at Guy #4 and mistakes him for Guy #1. Or he thinks he must have it good with women and has never seen their true nature. Guy #4 looks at Guy #3 and says there’s a guy who just doesn’t know how to push the right buttons with girls.

But is one of these guys wrong? Both men are drawing from often extensive experience reinforcing their views. Guy #4 gets laid plenty, has wonderful girlfriends who devote themselves to him, and overall has a great time with girls. Guy #3 gets ignored by women, taken advantage of by them, and screwed over in his relationships.

So what gives? Is Guy #3 just a crummier judge of character than Guy #4 is? He’s choosing the wrong women? Or maybe he’s just worse at meeting girls and running relationships?

While those things are generally true (i.e., guys with negative thoughts about women tend to harbor these thoughts because they aren’t good at getting what they want with girls), there’s more to the puzzle.

The ‘more’ in question is this: a girl’s going to do what she has to do to get what she wants from you. The difference between Guy #3 and Guy #4 is that Guy #4 makes sure women do things he wants to get what they want from him. Guy #3 has no such standard.