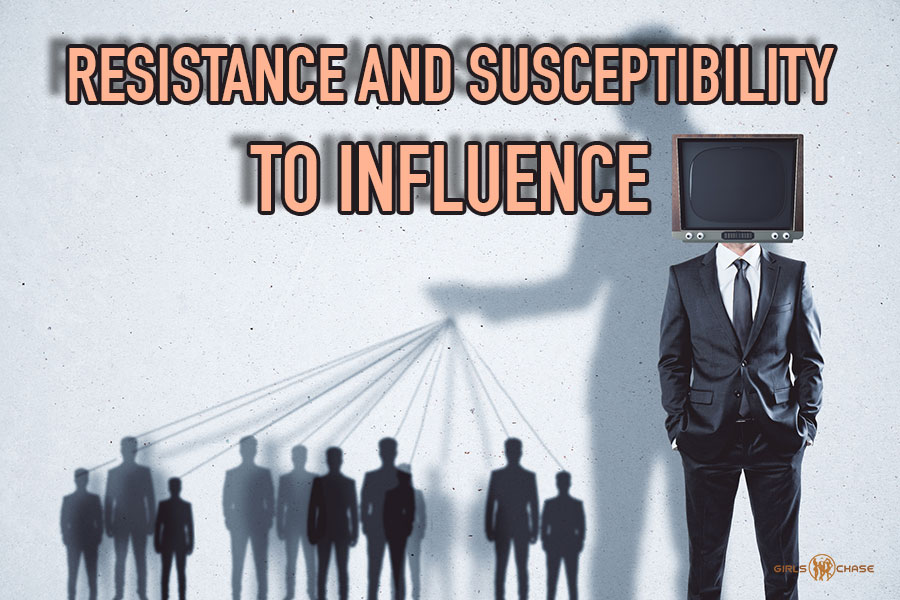 I wanted to write a quick post (that turned out not to be so quick) on resistance and susceptibility to influence. This article is something of a cousin piece to my piece on grouping and herding in dating from last week.

The subject of this article - resistance and susceptibility to influence- goes for you and the people around you. Your friends, your family, your workmates, your lovers, partners, and dates.

Everyone is susceptible to the influence of other people and forces. The degree of susceptibility varies from person to person, and situation to situation. Some people are more easily influenced than others. Some situations make it easier to influence people than others. Most people are only marginally aware (at best) of their influencability.

7. Are Those Around You Susceptible?

If you are susceptible to influence but do not realize it, other people can step into your mind and make you think things and believe things you might not really want to think or believe. This can lead you to taking actions you might previously not have agreed with. Sometimes this turns out to be beneficial; sometimes not really.

For an example of the beneficial sort, I had a friend in university who influenced me to apply for an internship with Nike and pick up a minor in supply chain. Until this friend, I did not care about getting a job after school, was doing the minimum necessary to get through school, and disdained the idea of internships. Yet because of this friend, who'd had an impressive co-op run building a new supply chain process at Tyco, I grew excited about getting a good job and doing better in school. I didn't get the internship, but came in second in a pool of 200 candidates and got some very valuable feedback from the interviewer which played a key role in me getting the job I did get, a year later. I got more a lot more focused on school and got straight As again the next semester, for the first time in years. And I got my dream job on the first try - I zeroed in on them and the job fair and blew their socks off in my interview. Had that friend not influenced me, none of that would've happened.

Years later, I was in a startup where one of my business partners influenced me to open up the purse strings more than I thought was wise, against my instincts and all the reading I'd done on startups spending all their money too quick being one of the #1 reasons they go under. He influenced me to do a number of other things more in-tune with how he thought we should do things and less in tune with how I thought we should. We ran out of money and I had to close the business and lay everyone off. The partner who'd influenced me to spend more managed to negotiate the rights to the business away from myself and the other partner (despite having joined the startup much later, and having taken far more capital out of it than he'd put into it), then sold those rights to another group of founders. The business is now a successful venture-backed business doing everything I originally wanted to do, and would've had it do... had we not run out of funds so quick.

I don't regret the experience (I enjoy Girls Chase much more as a business; and I received a lifetime of invaluable lessons in negotiation, predatory partnerships, and sticking to your guns - plus a healthy dose of business confidence after I found I'd been right all along), but the outcome was a direct result of that business partner influencing me to act in ways contrary to how I'd have acted on my own.

Every human being is susceptible to the influence of other human beings. There are no exceptions to this. Locate the strongest, most resolute human being in the world, and I guarantee you we can find a way to make him crack with enough time, and the right people, in the right situation.

The question we want to look at today though is how susceptible vs. resistant are you and those around you?