Can You Approach 4 Girls Per Day for 30 Days? | Girls Chase
Skip to main content 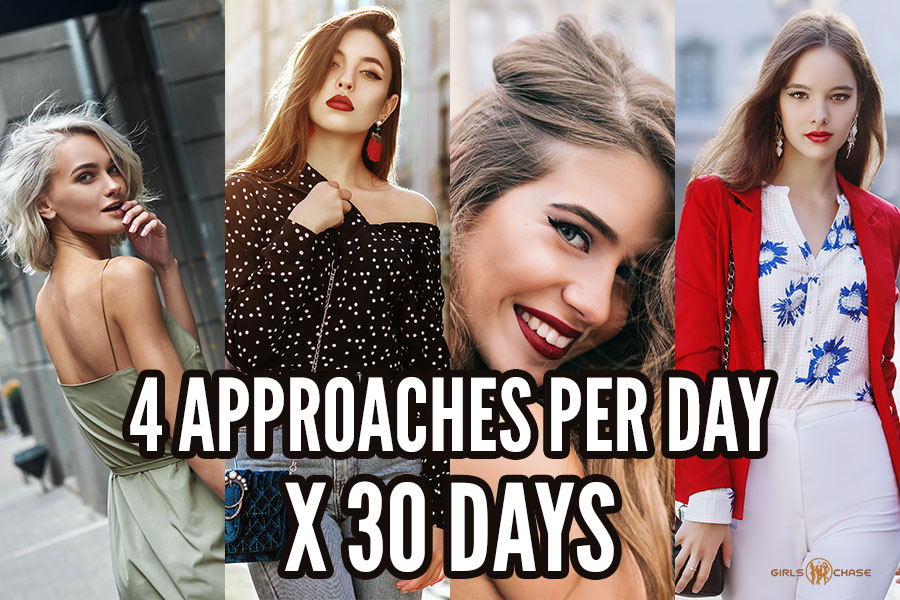 If you can do 4 approaches per day for 30 days straight, you can build some incredible momentum – and get some fantastic new women into your life.

A few nights ago, a friend of mine had a woman he describes as quite beautiful, with whom he's built a great connection over the past few weeks and for whom he's really begun to fall, come over to his home. She showed up in a tight red dress, with a plunging neckline, displaying her huge breasts (the biggest of any girl he's been with, he says... and he's been with about 70 women; he's not inexperienced), and her tight figure (she does a lot of running and biking).

This friend, a Christian, who has been trying not to have sex before marriage, and tells girls this, had this fetching red dress girl he's been seeing for a few weeks sit down next to him on his couch. She then turned and point blank (apparently having had enough of chastity) asked him, "Do you want to fuck me?"

My friend really doesn't like to violate his religious principles... and he also worries that any time he sleeps with a woman he doesn't marry, he does some harm to her. But anyway -- he's also no saint.

So he gulped, looked at this comely girl, and told her "Um... yes."

He then gave her three rounds before they parted ways. (and now he feels both good, because he really likes her, and also got laid, and bad, because he violated his principles!)

The very next day he went out, did a few more approaches, and met another girl he immediately liked.

He also had a few more dates set up throughout the week with other women he'd approached, whom he liked.

And yet another girl from his past whom he'd also very much liked but who'd ghosted him long ago suddenly messaged him.

This friend's a rather experienced day gamer, but he'd been in a rut. He hadn't been approaching much, and many of his approaches of late had not worked out.

Girls flaked on their dates with him; if he brought them home they'd resist his escalation and run off; and he was generally not doing too hot.

He's a middle-aged guy (mid-40s) and isn't interested in casual sex anymore. He just wants a wife -- one young enough to start a family with.

We were talking, and I said if I had 30 days with him in which I could get him to do absolutely everything I instructed him to do, I was confident I could find him a wife he'd be very happy with by the end of those 30 days.

He asked what my plan would be. I listed out 10 items.

Some of those we couldn't realistically do at the moment, because they'd require my active in-person involvement (I'd sit in on his dates and even on his escalations at his home to see where he's going wrong; I'd go around with him and pump the buying temperature on women he was meeting to motivate them to sleep with him; do approaches myself and pawn the women off onto him; etc.).

But there was one item on my list he could very easily do on his own:

And when he saw that in my list, he decided to try it on his own.

And just like that, he was right back in it.