Stop Making These 5 Texting Mistakes with Girls You Just Met 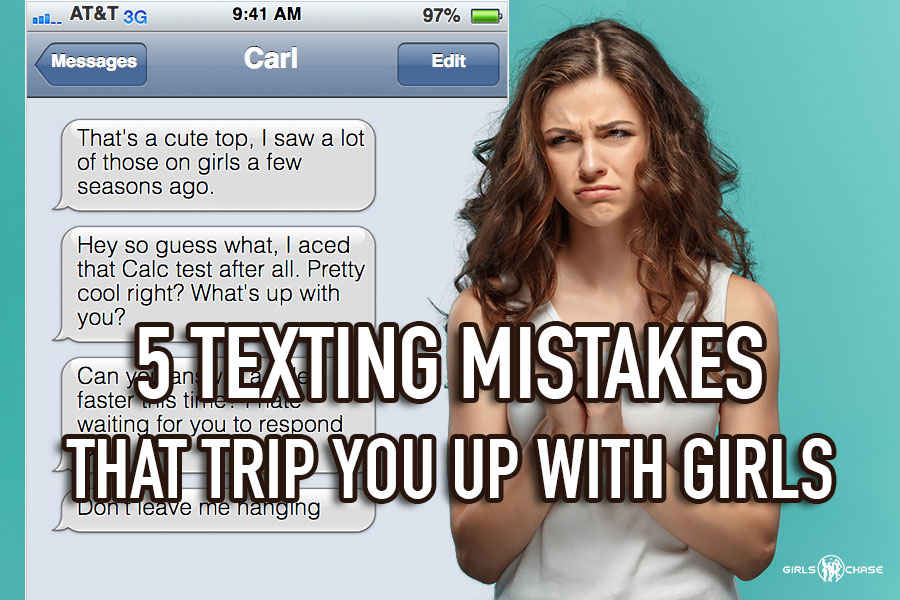 Social texting, text message negs, and asking her to answer quicker are a few common texting mistakes you’d do well to avoid.

These days, texting – or the various flavors of instant messaging – has clearly taken over as the preferred form of communication to get newly-met girls on dates and into bed. So much so that many seek out articles, books, and coaches to help them master the art.

Ten years ago, it was perfectly legit to call a girl you just met and set up a meet over the phone. The phone used to be a great tool, because you could show her how cool of a guy you are through voice tonality, which is still a fundamental art for in-person interactions (which is why setting up a meet should be your primary goal when texting). It used to be that I’d turn cold numbers warm through good phone calls – but those days are gone for the most part.

1. Texting Too Much Garbage

2. Trying to “Neg” Through Text

3. Asking Her to Answer Quicker

You’d think showcasing good voice tonality over the phone would go a long way when meeting someone new, but if you call a new girl nowadays, she most likely won’t even answer, because she’s not comfortable talking to strangers. The only person who actually calls her on the phone and gets picked up is probably her mom. In other words, you could have a very sexy voice, but if she doesn’t answer the phone, well, I guess you could leave a voicemail and hope for the best. But she’ll probably still think you’re weird for calling. “Dude, voicemail? Who does that? Why doesn’t he just text? Weirdo.”

Like it or not, people now prefer text communication for contacting new people, even when a two-minute call could accomplish the same thing as several texts over the course of hours. Whether or not people realize texting is most often less efficient, it’s always more comfortable, non-confrontational, and safe. So that’s what we do now.

The problem is that a lot of communication cues are lost in written text, even with the use of emojis. And it is more important now to convey your coolness through text than it ever was. Even if you’re just trying to get a date with a hot girl you met during night game or day game, the tool required to get to meet her again face to face is called “text game.”

Many dudes have not connected the dots between having a horrible text game and having very few dates. Ask any guy who is decently good with girls, and they’ll tell you there is a clear correlation between text game and actually getting girls close enough to you for sex to happen. But what is good text game? We have several articles that deal with that. In this post, I want to give you guys some additional pointers on how to avoid bad text game.

Okay, guys. Take notes, and don’t do this stuff. A Spanish native, Pablo was a longtime poster on seduction forums mASF and SedFast (as Pelusita). He's a one-time winner of the Fantasy PUA League... where the seducer with the greatest number of lay reports in a year wins. He specializes in physical game.