Why Tinder is Still the Best Dating App Out There

Today’s the last day of the launch of my complete “get laid on Tinder” system; tonight at midnight, the price goes up forever. To top off this even with a bang, I’ve put together a detailed look at Tinder – and why, despite some new up-and-comers in the dating app space, Tinder remains the crown jewel of all dating apps.

Long ago, when a man wanted to meet a woman he was interested in – one who was not only fun and interesting, but also very attractive – he has just had to rely on luck or subject himself to the frenzied and unreliable environments of bars and clubs.

And then, at the beginning of the turn-of-the-century, some smart people who wanted to take advantage of the Internet age created online dating websites. They wanted to use the potential that the Internet had of connecting people locally, statewide, nationally, and globally, and apply that potential to a romantic context. They wanted to be able to bring people together and be a conduit, a spark of people falling in love with mates who they would have never otherwise been exposed to.

But online dating added setbacks: it was stigmatized; most sites were poorly designed; and after a while, the hot girls found that there were just far too many droves of thirsty, desperate men trying to get any kind of female contact or acknowledgment that they possibly could – which often manifested itself in a deluge of dick pics. And because of this unpleasant realization, they began to vacate the online dating scene and leave it for girls who were truly desperate.

And then… in the late 2000s… there came the app revolution. 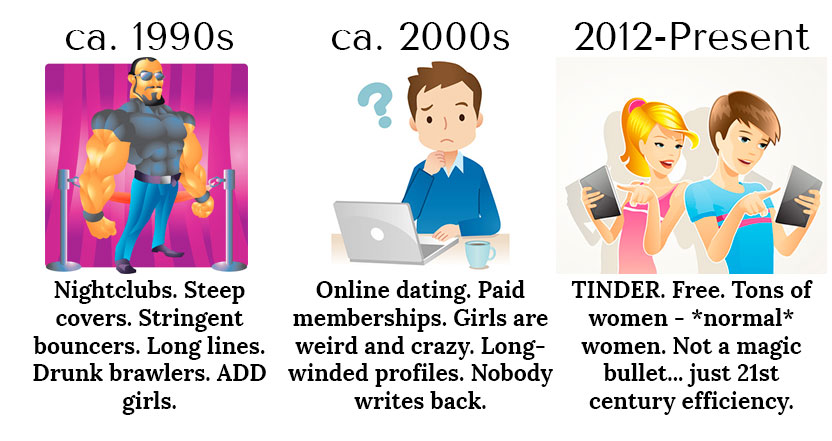 Suddenly you could do everything on your phone. You could check email, play music, and even handle your finances. So it was inevitable that, just like with the outset of the Internet age, someone would take advantage of this revolution in order to bring people together romantically. A few apps tried, but none saw true success until the advent of Tinder in 2012.

Tinder came and swept through the app world. It really put dating apps on the map.

What really got people was its effectiveness and simplicity. You simply look at someone’s photo, see how close you are, and then either swipe yes or no. And if you match, you could message them and potentially meet up.

And the best part was: it was completely anonymous. No one knew that you were on the app. Even people who came across your profile could only see it momentarily unless they matched with you. And if they did not, then you would disappear into oblivion and they would probably forget you soon enough. The icing on the cake: you could use the app from anywhere.

Like most things, in the beginning even Tinder was considered a bit fringe. It was considered – much like its online dating counterparts – for people who were weird or lonely or socially inept or otherwise outside of the norm of society. But slowly… and surely… it became more widespread.

Then in 2013, it started spreading like wildfire. Suddenly, everyone was on it: that girl from work, girls from the university campuses, girls from bars. Finally, something had managed to compel and keep hot, normal, socially adept girls in the online realm.

Now, the app is as ubiquitous as Google maps. Everyone has Tinder. But the best part about it is that it is not online dating. People are not on it to find their soul mate. They are on this king of dating apps for one reason and one reason only: and that is to get laid.

No pretense. No misunderstanding. Even for the women who pretend to be motivated by other reasons, this underlying truth still rings loud and clear.