How to Build a Male Body That Drives Women Crazy

Note from Chase: Ross is one of the members of the new Girls Chase forums. He's one of the posters who emerged early on as a guy with clearly a good handle on dating and seduction, meting out solid advice to posters in need. He expressed interest in writing a piece for the site on weight-lifting and building a better body, and since this is something guys have been asking about on here for some time, I told him I'd be thrilled to have him write something up. So here it is, Ross's first article on Girls Chase, on building a sexy male body that'll drive girls up the wall.

We’ve all seen those guys that are huge, muscular, and sexy. Women comment on their bodies and appear to be turned on from the get-go. Wouldn’t it be nice to have those same exact women looking at your body and being primed for sex from the beginning of your interactions with them? Luckily enough, getting muscle isn’t as hard as you think it is. Even for guys like Wes, who commented a few weeks ago:

“I've been a skinny guy all my life because I have a fast metabolism...gaining weight and muscle is difficult for me.”

I too was in this mindset some time back. I blamed genetics, my life, everything, just about, on me being thin. People would jokingly ask me if I ever ate, and would tell me that I needed to eat a jar of lard to finally put some weight on my frame. I was 6’3” and 147 pounds for two years after my final growth spurt in high school, and no, that wasn’t due to an eating disorder. I would lift weights, chug down protein shakes, and gorge myself with food and water whenever I stepped on the scale and didn’t gain weight.

However, no matter how strong my will was, I just wasn’t being smart about it, and eventually went on to pursue other goals, as this one obviously wasn’t panning out.

It wasn’t until a change in lifestyle, that, to my amazement, I started to actually gain weight. I thought it was crazy, but all I really needed was being able to eat as much food as I wanted at a buffet.

There are two problems that people run into when they are trying to build muscle. Either they aren’t working out their muscles hard enough, or they aren’t getting the proper nutrition that will allow for muscle growth. I’m going to teach you guys how to overcome both of these problems, and it is my hope and aim that you won’t have to go through what I had to endure before achieving the kinds of results and the kind of male body you’ve always wanted. 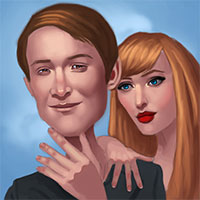 About the Author: Ross Leon

Picking Up Girls: The 5 Types of Pickup
You have &nbspleft this month.
Already a subscriber?Signin here
Not a subscriber?Get Unlimited Access Today!