Secrets to Getting Girls | Girls Chase
Skip to main content

Secrets to Getting Girls

Our flagship series on top-secret skills and tactics to master that will take even an advanced ladies man's results with women to the next level.

By 'feminine interest', we mean:

When you talk to girls, it must be pleasant. You need to make them smile. That doesn’t mean be a joker, but it DOES mean be someone it’s enjoyable to talk with.

When you go out to meet women, one thing you always ought to be doing is making women smile.

I don't mean being a clown or a comedian. I don't mean you have to load them up with hammy compliments or get them retelling all their happiest memories. People become hooked to things that give them specific social rewards. A good seduction follows the same principle, weaving a delicious romantic spiderweb.

What's it take to create a masterful seduction... one that pulls a woman in and magnetizes her to you, all the way to intimacy?

Talented seducers do something different from what ordinary daters do.

Well, they do many things different, but we're talking about one in particular today:

They construct a path of rewarding social/romantic experiences for women to encounter as they proceed through the course of the seduction with them.

Each step of the seduction journey reinforces to the woman how good it feels to be a part of the seduction, how much she wants to be around this man, and why she must continue.

This 'spiderweb of rewards', built well, keeps a woman hooked into the seduction, a thing that feels so good she does not want to leave.

If you can get yourself to think of seduction as a 'reward generation machine', you will begin to think of it the way all master seducers do. Every step of the way in dating and seduction, women have 'levels' you can unlock. And once you've unlocked a level, it stays unlocked.

In the back of your head, in every courtship you have, you must aim to unlock new levels.

3. Gradations in the Levels

Every man realizes this... at least in principle. And at least with women they've already closed the deal with.

It's why men invest a lot more time and energy into booty calling ex-girlfriends and former friends-with-benefits than they do random women from social circle or work they haven't slept with. She might not be sleeping with you currently, but if she's slept with you before, she's a lot more likely to come for a shag than a girl who hasn't bedded down with you yet.

This principle of 'unlocked levels' is also why you see so many women hung up on their exes, even when they know the guy isn't what they want, even when they have seemingly better guys pursuing them they could sleep with (then date)... yet they go back to the ex anyway.

It's why women you hooked up with once back in high school or college, when you run into them 10 or 15 years later, are still significantly easier to bed than any random woman you've just met, all things being equal (e.g., commitment status, etc.).

Once you've unlocked the 'sex' level with a woman, it's permanently unlocked (more or less).

That doesn't mean just because you've slept with a girl before, you definitely can get a repeat at any point in the future. Sometimes doors close.

But it does mean it's going to be a heck of a lot easier for you with her than with a girl you haven't gotten intimate with yet. The doors you've opened are a lot more likely to stay open to you than random closed doors are to open on their own.

But it isn't just sex that works this 'unlock the levels' way. Some guys slowly circle, other guys charge in. But if you want the most consistent results with girls, you'll do neither such thing…

It'd be nice if you could approach a girl, do a few things, and she just goes right to being your girl right after that, right?

Most women you'll meet aren't ready to go the moment you meet them, however.

Instead, you have to take them through a process.

The approach an ordinary man takes with women typically falls to one of two extremes:

It's better to be Guy B than it is to be Guy A, generally. Guy B at least will get some decent success with girls, even if he blows it with most of them. But you have to be a bit of an asshole to pull off the Guy B approach.

Guy A spends too much of his time pining away after girls who may not even realize he likes them, or do realize it but don't feel anything for him (and never will, since he never really does anything with them).

Both men are extremes though.

One moves too slowly and softly, like a seduction sloth.

The other moves too brazenly and rushed, like a seduction rhinoceros.

The way the most adept seducers move is neither like the slow-moving, soft sloth, nor the brazen, rushed rhino.

The best seducers move like a cat: lots of little steps, made quickly, before they pounce. Looking for a surefire way to attract more women? Having trouble finding a good wingman? These and similar issues can be solved by having friends who are girls.

It’s always great going out with the homies, especially when you all have one thing in mind – getting mad pussy.

Sometimes, you might notice not everything is working in your favor, though. For example, maybe the wingman you need isn’t always around, or you might run into some friendly competition. Perhaps the guys you hang with aren’t even into pickup.

1. Girls Are Great at Picking Up Girls

2. Having Girl Friends Increases Your Value

3. Going from Friend Zone to Lover Is Possible

4. Get Your Girl Friends on Your Social Media

Securing a wingman to take one for the team when necessary can be challenging. Your boy might be in a relationship or is just not willing to handle the “bucket friend.”

So, what can you do to combat these issues and obtain some valuable wingman-like support in your seduction efforts?

Here’s one solution: get yourself some friends who are girls!

If you lack male friends who can help, or even if you just want a general edge in getting girls, read on!

But personality interests differ. Some guys like nice girls. Other guys like girls with a bit more... attitude.

This video is for guys who want a girl with attitude. The girl most guys call a bitch? Yeah, for you, she's a snack. 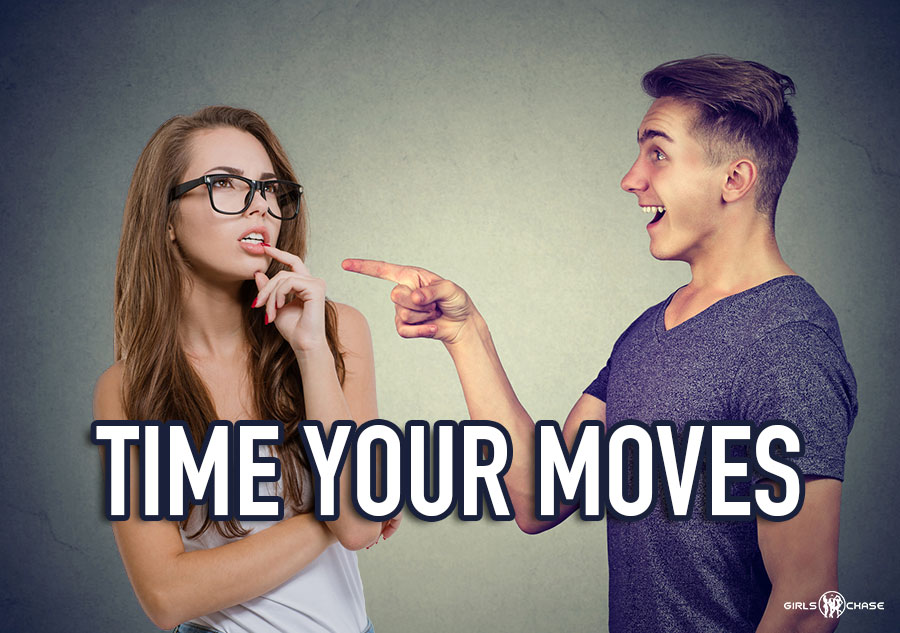 When your words, actions, and moves aren’t timed right, it all feels wrong and incongruous. Yet when the timing is right, everything becomes magic.

When a comedian makes a joke, even if it’s a spectacular joke, if the timing is wrong, nobody laughs.

Usually on Girls Chase we talk about timing in the context of:

1. The 7 Stages of Courtship

If your timing is off, everything in your process will be off. You’ll fly blind through the courtship, trying this here and that there. Timing, you will notice if you observe enough guys in action, often is the Achilles’s heel of many men who work hard in seduction but reap few rewards. When you see such guys, your frequent reaction will be “Why is he doing that then? He should’ve done that 10 minutes ago!” or “Why is he saying this now? She’s not ready for that yet!”

The first is to give you a rough sequence of events a courtship progresses through.

The second is to give you a couple signs to watch out for to let you calibrate your timing no matter where you’re at with her. You talk to a girl on a street somewhere and you reach that ‘moment’. She smiles, you smile. She looks at you with expectation.

Invite her to do something!

You’re with a girl in a bar and it reaches that lull where it hasn’t gone bad but has grown stale. And now the pressure on you to entertain or interest her begins to mount.

Don’t entertain her; invite her to do something!

You meet a group of cool people at a party and hit it off. There’s a cool guy and some real cute girls in the group. They like to talk to you and you like to talk to them, but it seems like nothing will happen with them.

Stop waiting for them to take charge. Invite them to do something yourself!

If you want a social or romantic future with any person you meet, make invites.

Welcome back to another episode of Dating Mechanics! For this podcast, I have something different and special for you. A few of us Girls Chase authors met up in Stockholm, Sweden this past summer for a few days and nights. We met up with each other (some for the first time), met plenty of women, both during the day and