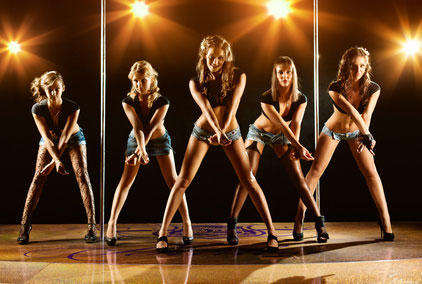 As of today, we've got a new team page up so you can get a little more background on the people who are bringing you these fabulous programs and articles. You can view the new page here:

If you've been wondering who that scoundrel Ricardus really is who's been writing all those posts, or who the heck that guy Genaro is that writes back to you when you send us a message, well, now you've got your answer. Head on over and check the new page out, and let me know what you think below.

Mark Manson's been kind enough to get a guest post from me up on his site, PostMasculine.com.

Why You Can't Let Her Go In his latest book Minimal Game: The No-Nonsense Guide to Getting Girls, a fast-paced 110-page read, Aaron Sleazy starts off with a refreshing, commonsense hard slap of the overcomplicated approach to pick up and seduction that many companies in the space employ.

“You will get the impression that finding a sexual partner was not something natural and primal, but instead required years of serious study as well as the attendance of workshops costing several thousand dollars, in which people of often doubtful levels of competence teach you a million bizarre ways to talk to girls.”

This sets a clear tone for the rest of the work to follow, focused on shedding the over-complications of many of the industry's heavyweights and boiling the act of seduction down to its bare essentials, including everything from looks to expectations to even a section colorfully entitled "Learning from Deadbeats."

Sleazy starts off his book with a long focus on correcting the mentality of men who don't yet see women as sexual creatures. "Sex has achieved an almost mythological status in Western societies," he writes, "and if you are not getting any, you are supposed to feel bad."

After this introduction, we're off to the races. Are you really, really good at what you do?

So how's your current job? Does it suck? Is it "just okay"?

Or maybe you're doing well, but not as fast as you could be?

Anyways. We're looking for people who are the best, highly engaged, learn quickly, and are just awesome and amazing and fun people to work with.

Write to me at iamthebest@girlschase.com if you are - tell me what you're good at, why you got into it, and what you see as the meaning of your life.

(the actual job? I've got a few, I'd much rather hear from people who are awesome about what they're awesome at. I've got the right fit for you if you're the best and coolest person you know) It's finally here. Whew, seemed like it was never going to make it out.

Pay no mind to the hoakey girl-on-the-side-of-the-box graphic. I'm running on next to no sleep here. It's been a brutal week...

Anyway, I'll let the sales page do the talking. I think it's a pretty amazing product... but of course I'm biased. I still think it's pretty good, though. Have a look and see for yourself...

Spellbinding: Get Her Talking

Hope you find it to your liking. I think you will. We're one week away from launching Spellbinding: Get Her Talking, after what feels like an eternity of having it in production. I'm really excited about this program; it's 63 minutes of the most information-packed, in-depth material on having mesmerizing conversations with women I've seen anywhere, and it turned out a lot better than I expected it would, thanks in no small part to a fantastic production team.

We banged this one out on less-than studio-grade equipment, but we got it as close to studio quality as we could on the small business budget GC's running on at the moment. Assuming this one sells well though and people respond well to the program and like the material -- I'm thinking they will... I'm hoping they will! -- and, that sales continue on the upward trend they've been on consistently all year, you can expect that programs released here will continually up their production quality, while retaining the same great, hard-hitting content you've come to expect from me and Girls Chase.

I won't waste any more of your time with writing here though -- you clicked on this link for the preview, I know. So without further ado...

Hey gents, some cool news for the readers of this blog.

I've opened up five (5) free phone coaching slots on a first-come, first-serve basis. If you have any questions on dating, seduction, relationships, women in general, anything along those lines you'd like the chance to pick my brain on, I'm opening the opportunity up to the first five guys to respond.

You must be comfortable being recorded, as this may be used in a future program sold here. I'll also ask you for a list beforehand of the 5 to 10 topics you most want to focus on in our coaching session.

Your free phone coaching session will last between 30 and 90 minutes, and we'll look to schedule it at a time that's convenient for you and convenient for me wherever possible.

If you're ready to take the plunge and start getting trained up right now, fill out the quick form below (click "Read More" to view the form if you're on the main page) and I'll get in touch with you soon. Look forward to hearing from you!

It was a long time coming, but How to Make Girls Chase is done, complete, and out-the-door. This is my masterpiece, for the moment -- originally intended as my farewell bid to the world of seduction, but since I might stick around a bit longer, at least I have it out so that no matter what happens, there's a record of what I've soaked up and figured out over the past six years of learning, practicing, and teaching pick up and seduction.

HTMGC is 406 pages of detailed, practicable information presented in step-by-step fashion to guide you to success and results with women. It's designed to be both manageable for beginners, and invaluable to long-time practitioners of the social and seductive arts, with cutting edge techniques presented in an easy-to-follow format that explains the rationale behind it all - so you know both what works, and why it works.

Click here to add a copy to your cart and get the download in your email right now, or go to the How to Make Girls Chase sales and information page to learn more about the book.

It’s nice sometimes to take a step back from your usual repertoire and see how someone else does things. And so it was with reading Aaron Sleazy’s book, Sleazy Stories: Confessions of an Infamous Modern Seducer of Women. I’m a nightclub guy, and Aaron’s a nightclub guy; and we both of us like pulling off fast lays with minimal conversation whenever possible. But that’s where the similarities end.

Sleazy Stories chronicles a single year of Aaron’s experiences with women, from the beginning of 2008 to New Year’s Eve of 2009. It was a year of big growth for him, and he details his advancement from a guy making out with women in nightclubs at the outset of the year to a guy getting public gratification from women in nightclubs by the end of it.

I’m usually an anti-making-out-in-the-nightclub guy; I had a friend recently who kept making out with girls in nightclubs and losing them, and I told him to stop making out with them and just invite every girl who seems ready enough to kiss him to instead come home with him. Sleazy is the polar opposite of me in that regard; he shows, quite illustratively, how a man can go from kissing women in the club to ending the night in a very satisfactory way.